Meteora, literally meaning ‘high in the air’, is one of those places where even an extremely talented wordsy-person struggles against a single photo...
Ouzo and cigars. Breathtaking sunsets. Perfect weather. Greece may be economically ruined, but geographically and culturally, this here is paradise.

Greece was always to be a quick stop on our journey - not least because of the ever-pressing debt crisis. Deadline after deadline had passed, and procrastination was no longer an option for the already shattered economy The situation was dire and coinciding with our visit was d-day - an unavoidable decision had to be made.

And we didn't want to be in the country when the ball dropped.

From Albania we set our sights on the soaring monasteries of Meteora, in the heartland of the mountainous north. Getting to this popular destination would be easy, surely?

Oh, how wrong we were.

Greek bus timetables are few and far between, and almost completely non-existant online. Bus drivers also take great pleasure in doing nothing more than their job description; driving the bus, and cursing us in Greek.

Perhaps our instructions were too simple; Turn up at the station and figure it out.

But 1 mighty day and 4 buses later we went from Albania to Greece via the little-used Konispol border crossing. Read how we did it here.
The curious landscape of Meteora rose from the seabed over 60 million years ago, and nowadays, tourists pour over 24 monasteries like chocolate over ice-cream. It gets very busy here: this is solid UNESCO territory, and is even a protected Ecological Zone. The jaw-dropping pinnacles are a haven for rare birds and flora.

These barely accessible monasteries were built in the 14th and 15th centuries, in a time when, we’re convinced, monks were avid rock-climbers and loved a challenge. Less skilled pilgrims would be hoisted up vertically, almost 400m’s in some cases.

But we'll take a back-seat with the eloquent adjectives and glorifying descriptions this time: Meteora is a visual feast, so sit back and enjoy the galleries. 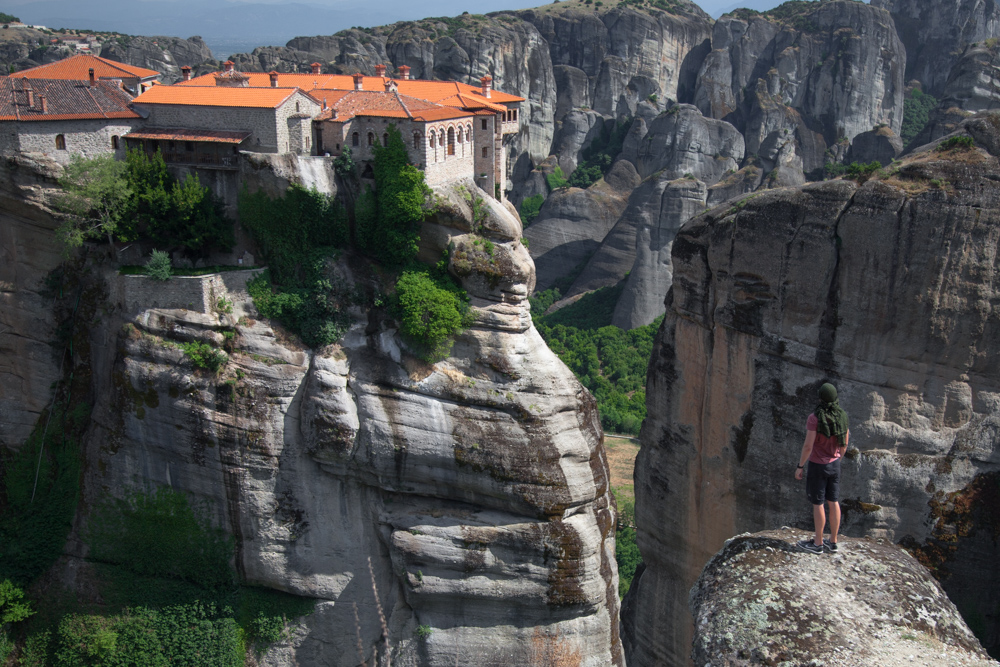 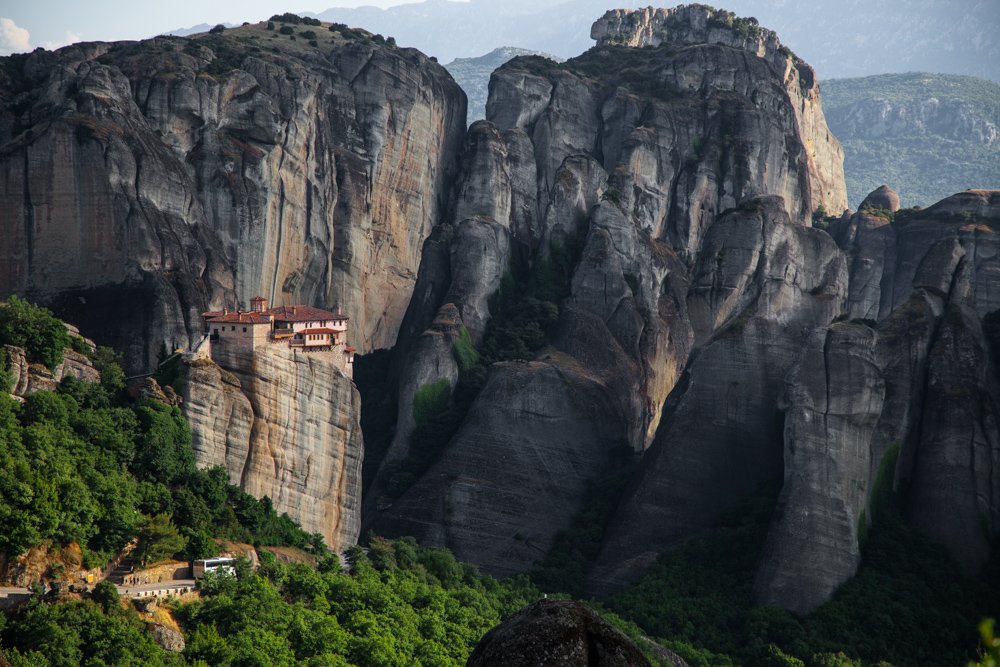 Maybe the monks were just trying to escape the tourists?
Meteora was quiet back in the day, spiritual and healing. And despite the buses plying the well-paved road directly between the main 6 monasteries today, it is still possible to get a sense of solitude.

Two towns service the area - Kalambaka is the larger and more developed, where smaller Kastraki has more of a village atmosphere. Our circular walking route took us around the monasteries and through both towns.

Slowly taking the hour-long uphill route through the Pinus pinea forests in the morning sun gave us ample time to admire and soak up the changing landscape. Our only neighbours were the silent white storks circling slowly overhead, nesting high up in inaccessible cracks of the towering pinnacles.

Of course, that silence was shattered as soon as we hit The Road. Air-conditioned buses loomed past us, efficiently carrying passengers from monastery to monastery. And here we were, walking in the sweltering midday sun with only a bottle of water between us. And perhaps a camera. Or five.

But we wouldn’t have it any other way - there is a magic in plodding around a corner, seeing a monastery slowly appear from behind the trees like some sparkling treat. We jumped barriers and pushed through thistles to seek out the perfect photo compositions. Eventually we squeezed our way into the Rossanou Monastery, paying a hefty EUR3 cover charge each. We didn’t really rate it - best to admire these wonders from afar.

We settled into our sunset, and with ouzo and cigars at the ready, befriended a Russian family who shared their whisky, and a special kind of bear-chocolate famous throughout Russia. It was well after dark by the time we made it back into town, scraping together the last of our euros down to the cent for Moussaka and beer. Restaurants were only accepting cash, completely distrustful of any electronic transactions involving banks. 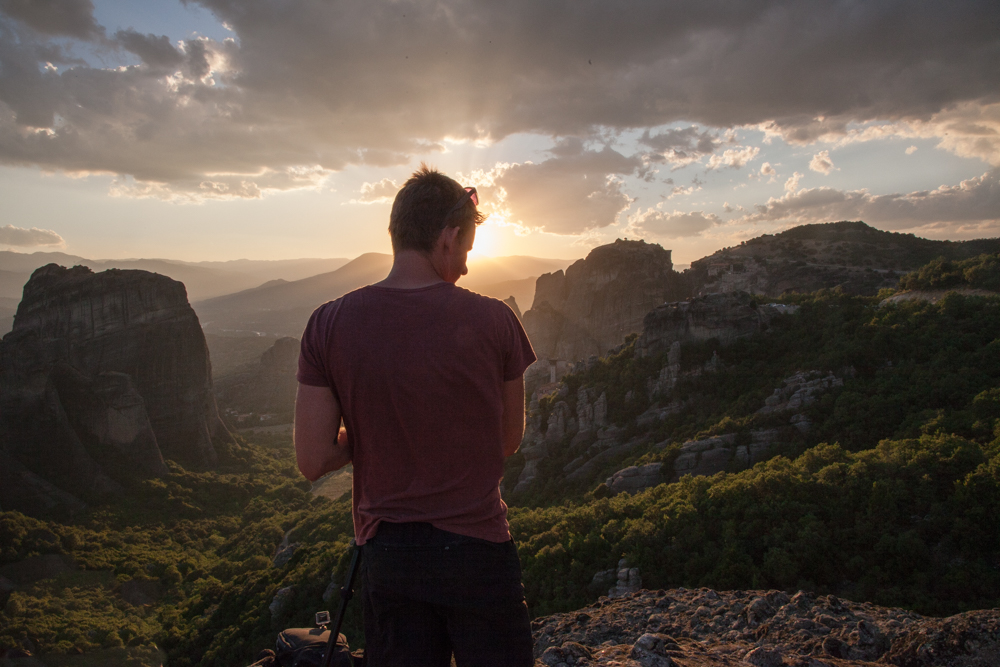 Pete soaking up the last of the golden light 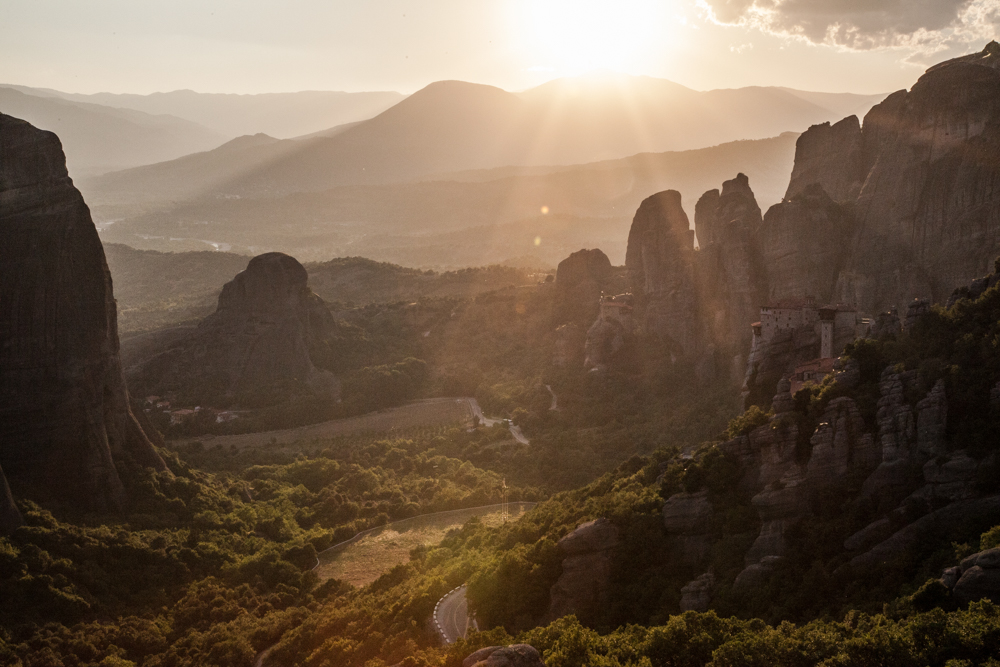 A golden garden of Eden.
​As quickly as it had begun, our Meteoran odyssey was over. A day of travel torpedoed us straight into the heart of hip and happening Thessaloniki just in time to book bus tickets to Istanbul the next day, and have a few hours to dip our toes in the vibrant culture all over the waterfront.

3,000 year old Thessaloniki may not be the prettiest of cities itself, but locals swarm to the seaside every evening, looking their best, and the vibe on the boardwalk is pumping. It’s no wonder that the city is a party mecca.

We looped around the White Tower and Agia Sofia church, pausing to admire excavations under the main street revealing some kind of ancient foundations. But eventually we run out of steam, dragging ourselves back to our dismally decrepit 1-star ‘hotel’ of dubious destitution (say that 3 times fast after a sleepless night). With beds made entirely of springs and a single bare light-globe illuminating the dark room, we're convinced the room doubled as a torture chamber. We were silly enough to pay for the privilege of a restless night to the buzz of main-street traffic.

We left too early the next day to try Bougatsa, a famous pastry of Thessaloniki, and yet another 11-hour bus trip has us in Istanbul by the evening.

We may have traversed the entire north of Greece in a handful of days, but seeing Meteora was a true highlight of our trip so far. The next days we read that banks had restricted cash withdrawals from ATMs throughout the country, and with reduced bus services, tourists were having trouble getting around. We had made it in the nick of time - and now had all of Turkey to explore.