"Don’t worry. Very safe. No kidnapping here.
Safe now, no need to worry. Safe here…"
We actually weren’t all that worried - not until our driver had ‘assured’ us of our safety as we bounced along a dirt road through the predominantly gypsy area. We were actually more worried about his driving abilities as we swerved around road debris, narrowly missing rusted posts that formed a (more or less cosmetic) delineating between road and footpath.

Macedonia is a little crazy in the way that it teeters skilfully between extremes. While our driver was driving like a madman, his voice was perfectly calm. Yet when we arrived at our destination, he turned off the noisy engine and began to overeagerly explain anything he could in rudimentary English. Bless his cotton socks - he meant well, but enthusiasm sometimes needs to be dialled down.

It’s perhaps why we enjoyed Lake Ohrid so much. In stark contrast to our weeks of journeying through the omniscient concrete of Eastern Europe and the Balkans, we had finally reached the glistening jewel of the Balkans. A 350 sq/km freshwater lake 120km inland from the Mediterranean Sea, this is where Macedonians, the lucky things, get to spend their holidays - if they can survive the maddeningly mountainous 3 hour drive from their capital.

Which probably explains why they’re so damn crazy. 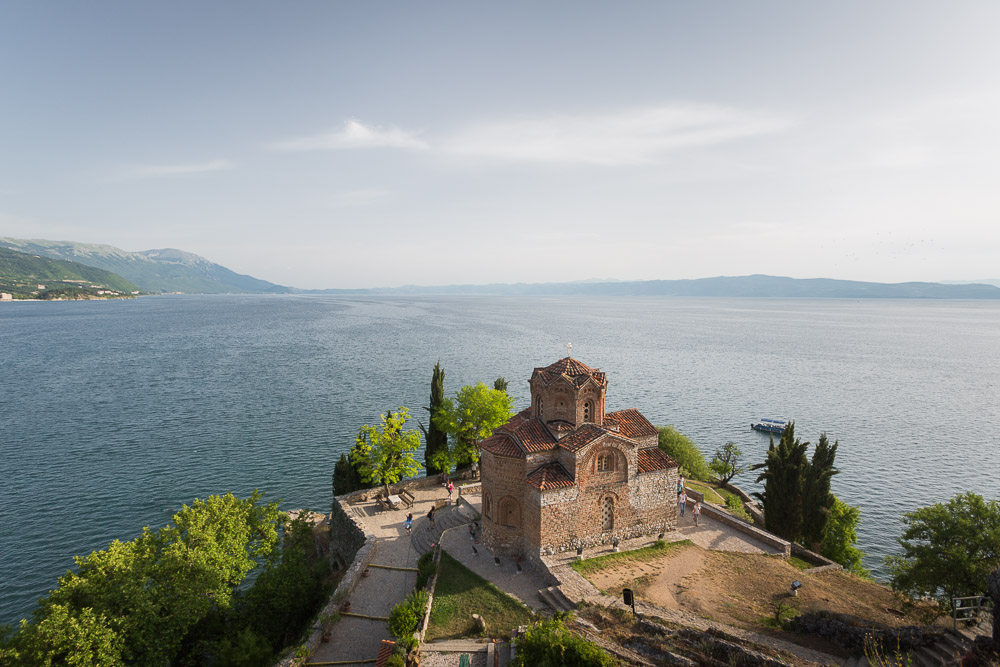 Sweeping vistas and ancient churches... we could get used to this...
Lake Ohrid is the largest and most developed of three lakes which are in a curious border region of Albania, Macedonia and Greece. The thing that surprised us the most, was the decidedly Mediterranean vibe of Lake Ohrid. We were surprised to see stripey-sailor inspired summer threads on aviator adorned tourists (and locals alike) relaxing in espresso and cocktail bars. Boat cruises, seafood and sunsets over the lake? Ohrid is a freshwater Adriatic.

And at a fraction of the cost.

With our backpacks in tow, we shuffled up and up through twisting cobblestone alleys to find our guesthouse (naturally, not where Google Maps initially said). For EUR10 a night, our modest room championed a balcony view over the lake, and was at a level of cleanliness and nicety that we hadn’t had for quite some time. We were very much at the fringes of ex-Yugoslavia; Soviet influence was waning.

Time moved slowly at Lake Ohrid. We went for runs down the boardwalk in an attempt to off-set the amount of bürek (filo-pastry filled with spinach or meat) we ate. We window-shopped along the slippery-paved high street, observing the latest Macedonian lake-wear. We wandered up to the windy look-out point over the Church of St John at Kaneo and around the other side through a district with a gypsy majority. We even tried to find all dozen or so churches in Ohrid - a fraction of the 365 it once had. Yes - one for each day of the year.

As we nibbled on breakfast on the balcony, we mused that this was the first time we had actually taken a break since first arriving in Prague. Most of our time was spent organising our wedding, and since then we had kept a steady pace through 6 countries. With the litany of bus and train schedules, accommodation bookings, country research and, of course, photo project shoots, we felt like taking a few days out to relax was finally on the cards. 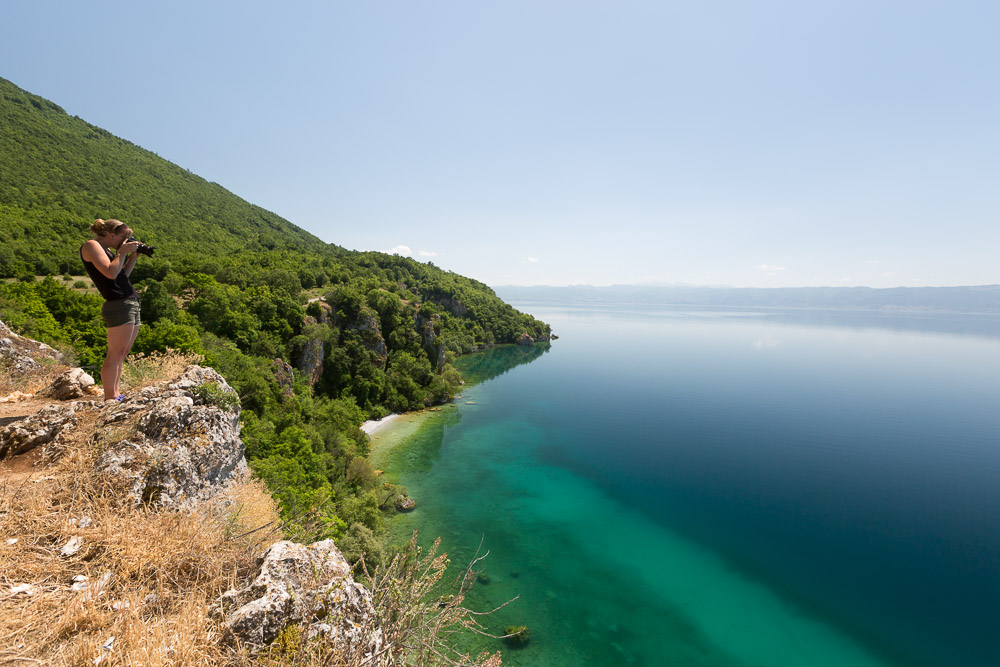 Where the forest meets the lake
Lakes are vast places and are best explored with some kind of engine, ideally powerful. For those with money at Lake Ohrid, sailing a boat across the water, catching Ohrid trout along the way is a common - and attractive - method of transport.

Our transport means were more humble though - we had wanted to hire a scooter. Ray-Bans, little winding roads and sunsets, we had this picture in our heads that our lake adventure would be quintessentially… Vespa-ish.

And so, an hour later, we found ourselves driving down the lake shore in an abysmally underpowered shell of a “car", devoid of manufacturer badges and any sense of self-respect. Gears slipping and speedometer needle flickering, we raised the volume on our portable speaker to drown out the sound of the engine - and we hadn’t even approached the hills yet. 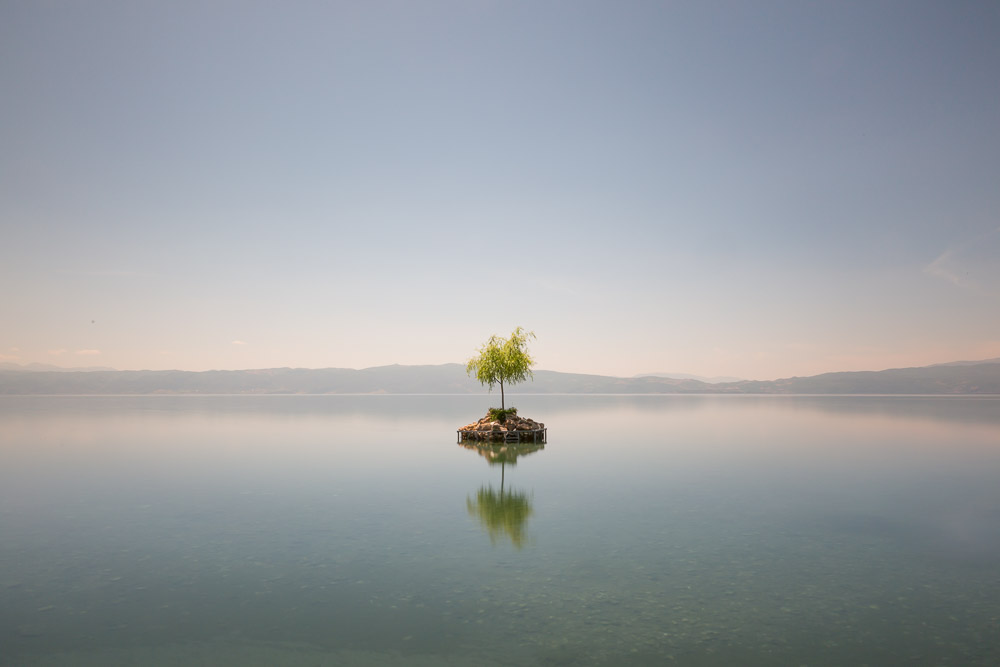 We had a destination in mind: the historic and mountainous town of Kruševo, nestled in the heart of Macedonia. At 1350m above sea level, it’s not only the highest city in the Balkans, but also home to a monumentally strange-looking building which may possibly be proof that aliens have visited our planet. With camera gear and chocolate in the car - we were ready for a road trip.

Rattling down the highway in a constant battle with the clutch, we passed through towns quicker than we could see the markers delineating their existence: A placename here is literally a shop and a shed, or a campsite, or a small collection of single-story buildings of unknown purpose - most of them bearing huge cracks, overgrown vegetation and most certainly abandoned.

There are only so many times we could 'ooh’ and 'ahh’ over and over as the road skirted only meters from the reeds by the lakewater edge, and eventually we stopped at a tiny pebble beach. We had this deserted little snippet all to ourselves, and looking out across the bathwater-still lake is one of those memories that will stick with us forever.

We happened to be here during spawning season, and dozens of little fish nibbled at our feet in water which was so clear, we had to create ripples to just show we weren’t standing on rocks in our photos. With no major rivers filling the lake, nor any underwater exchanges, the exceptionally clear water can (apparently) appear transparent even at a depth of 22 meters. Not only UNESCO listed, but NASA named one of the lakes of Titan (Saturn’s largest moon), after Lake Ohrid.

With the little fish happily fed on our dead skin, we decided to move on down the lakeshore, pausing for sweeping vistas high up in the cliffs. We would look down perhaps 30 or 40 meters through the turquoise waters and see fish noodling back and forth in the shallow water. But it was time to move on to new scenery. We took a squiggly road up and up through the arid Galičica National Park and headed inland toward Bitola.

Around 80% of Macedonia is mountainous, and as our little engine spluttered its way up, over and around, we realised just how indirect our route was. From Ohrid to Kruševo, as the crow flies is around 35km, but our windy road, at the mercy of geography was almost 4 times longer. And in our underpowered car (and scenic stops), we spent the better part of a day getting there. 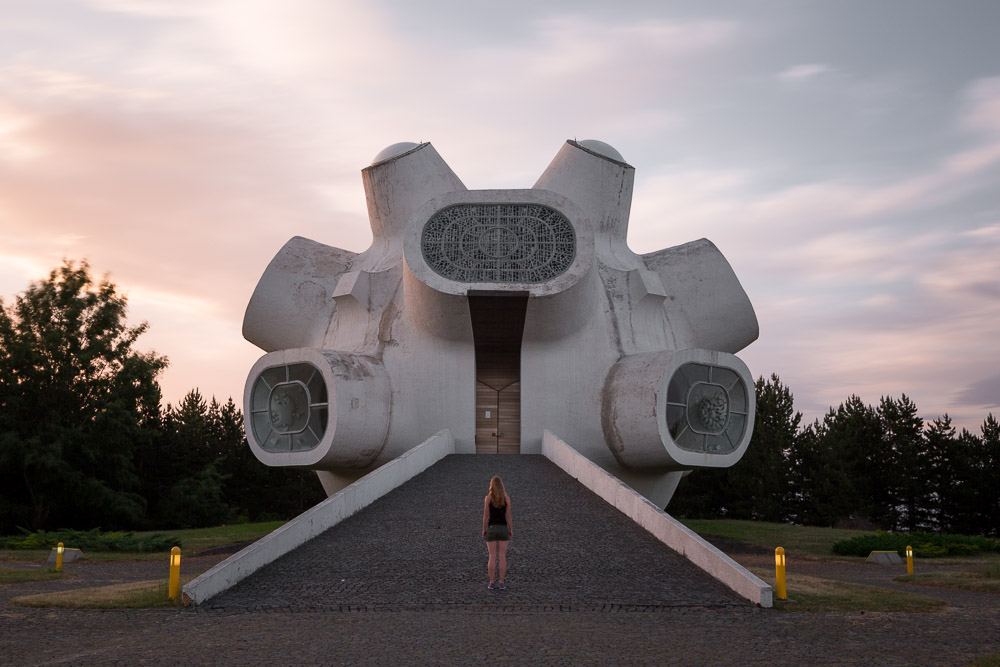 Beam me up!
In a race against the lowering sun, we passed through humble agricultural villages and more than one gypsy settlement. We stopped only for ice-cream at dusty roadside stops where men cooled themselves by lifting their shirts over their bellies (known as Balkan air-conditioning).

Kruševo itself was unlike any village we’d seen so far. A tiny ski town, the winding streets were maddeningly narrow, steep and looked more like a Pollock painting. Our car screeched to a halt outside the Makedonium memorial, and we rushed through to the building itself - a serene oasis, with a rather striking silvery-white horse nibbling on some grass nearby. The scene, strangely, reminded us of … Shrek.

In 1903, an event known as the Ilinden uprising occurred which lead to the creation of a free Macedonia. As the sun set slowly, we had plenty of time to stop and take in the weirdness of it all. Here we were, high up in the mountains, opposite a building which looked like a gigantic white heart valve. Most war memorials are full of soldiers and courageous scenes of battle, yet, well, we weren’t quite sure what to make of this one.

Dinner was proudly organic and hand made, colossal serving sizes matched by the chef himself (who was literally the size of Emma and Pete put together). It was a long drive back through the dark. Plenty of eyes peered out from the forests, but luckily none of their owners decided to come onto the road.

We had one more day around Lake Ohrid, but with the clouds - and eventual rain - moving in, our time in the water was limited. With bus connections to Albania organised for the next day, we treated ourselves to a ‘nice’ dinner. Sarma, a grandmother-made staple of many countries in the region had eluded us so far, and with far too much excitement, the meat-filled rolls of cabbage were devoured in record time.

The next morning, we had at least 4 bus connections to make it to our next destination - coastal Vlorë, about 150km south of the Albanian capital of Tirana, but an organisational world away from our safe little hamlet. It was to be quite an arduous journey.

We had quite an adventure getting from Lake Ohrid, Macedonia to Vlorë, Albania - we even wrote a guide on how to do it. Have a read here. 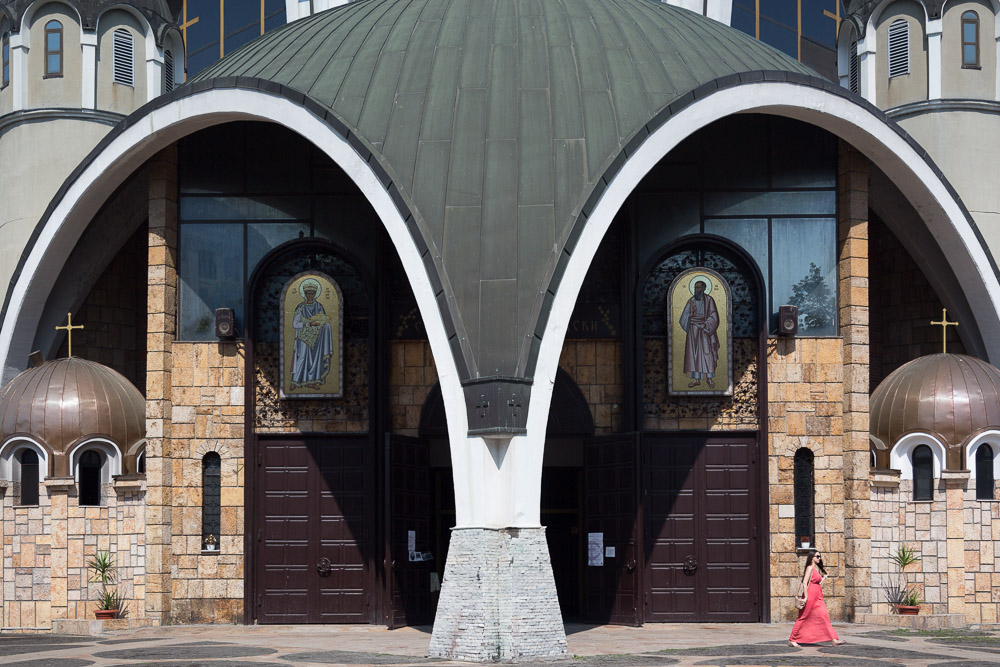 Skopje's peculiar-looking Church of St Clement of Ohrid
If Lake Ohrid is the jewel in the crown of Macedonia, then the crown is worn by a demented joker, one whose ability in urban planning is to be seriously questioned. Controversially, central Skopje, the capital of Macedonia, has been under extreme development for many years and is only now beginning to emerge from its heavy-handed facelift.

In 1963, a devastating earthquake destroyed 80% of the city, and, unfortunately, a lot of money has poured in to rebuild the city in a style reminiscent more of an amusement park than anything the locals can relate to.

We talked to many people - from humble coffee-cart sellers and protestor camps outside the government buildings, to successful business owners, and there seems to be familiar tale of corruption which is shared across countries which have quickly gone through a period of drastic change: The people at the top have a lot of money, and they do what they want, while the people in the middle and bottom suffer with the consequences.

Skopje is full of gargantuan bronzed statues which feel extremely out of place. We’re regaled of stories where artists are paid millions for a statue which must surely be valued at tens of thousands. A simple way to move money around, and perhaps the oldest trick in the book. 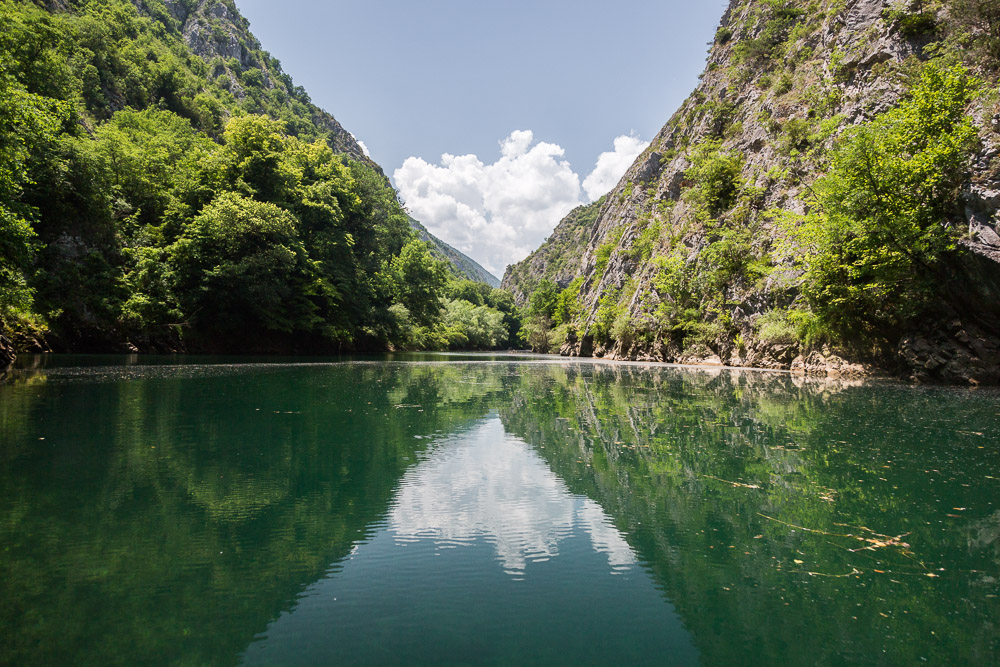 Matka Canyon - fresh water.. but filtration needed...
Skopje may not be a city for everyone, but it is a fascinating place if even for its complete contrast to other capital cities in the region. But it does have one saving grace a mere stones throw from the city centre: Matka Canyon, a narrow lake with monasteries and caves which is immensely popular for day-trippers. Vrelo Cave could even be one of the deepest underwater caves in the world. No one really knows for sure.

With cake in our bellies, a visit to the caves, a walk along the canyon walls (where Emma bravely had to chalk up a swim in the frigid waters), Matka was the perfect day-trip from central Skopje.

Controversy seems to be at the core of Macedonia. The Yugoslavian government invested in Macedonia heavily, and the country prospered. But times are tough. Greece is the largest investor in Macedonia, and, well, there are a lot of problems there now too. There is an understandable nostalgia for ‘the old days’.

There is even controversy in the name. The word ‘Macedonia’ is still used today to describe the entire north section of Greece, stretching all the way to Turkey. It’s a hot topic, and one that upsets Greeks to no end. This is why FYROM is often put after Macedonia when describing the country - Former Yugoslavian Republic of Macedonia.

But politics aside, Macedonia is a geographically beautiful and a fascinating country to visit.

Not convinced? Have a look at our photos. And book that trip to Lake Ohrid for summer. You won’t regret it: