Russia: A Journey across Siberia

We’re jam packed into the back of an old Russian UAZ van, and its bumpy as hell. Its 7 hours to Olkon Island. Nothing is close in this part of the world.
After 4 days on the train from Moscow, we jumped off for our first Trans-Mongolian stop to head to Lake Baikal, the largest freshwater lake in the world.
If you've missed days 1-9 of our Journey across Russia click here to catch up. Otherwise read on!

The plan is to set off towards Lake Baikal first thing in the morning, but after sleeping well through our alarms thanks to the 5 time zones we’ve just crossed, we sleep till 11 am and wake to the banging on the door of our hostel owner.

‘Checkout was an hour ago”

Bleary eyed we stumble down stairs and realise the only bus heading to Olkhon Island has left three hours ago, and there is no chance of making the seven hour journey today.

The upside of missing the bus was the chance to wander the streets of Irkutsk. After feasting on our first proper meal in days, we set off to explore the streets, past row after row of quaint timber houses, complete with slatted shutters and lace surrounds. Somehow it looks more akin to what you would see in a Western movie, not what we expected to be a classic Siberian style. But then again, who really knows what to expect in Siberia?​

Along our walking route, we happen across a barber with an awesome looking sign, and agree that Pete's beard is in desperate need of a trim. We’re welcomed at the door by a guy with the darkest, thickest and most immaculately cared for beard you’ve ever seen. Pete is shown through to the parlour, where he’s pampered and expertly preened, whilst Emma finds herself downstairs in the whisky (or perhaps vodka) den. The bartender is huge, covered in tats and of course, has an incredible beard. If we were back in East London, this place would be the coolest bar in town, but here is’t just another Siberian barber.

We’re jam packed into the back of an old Russian UAZ van, and its bumpy as hell. Its 7 hours to Olkon Island. Nothing is close in this part of the world.

The lake we’re headed to holds a staggering one fifth of the worlds fresh water, and if you’re lucky to visit in the depths of winter, you can drive straight across it and see the beautiful patterns formed by cracks deep within the ice. A forest fire has been burning on the northern side of the lake over 300km’s away for the past month, and the closer we get the thicker the smoky haze in the air gets.

After a couple of stops in the middle of nowhere to stretch our legs and grab a snack, we finally pull into the ferry crossing, where we disembark for the ride across the water to our island destination. Our UAZ pulls up onto the ferry, and we all pile on, leaning over the rails and getting the full brunt of the Autumn winds. Its a strange feeling realising we’re on a freshwater lake but can’t see the horizon….we may as well be setting off across the ocean.

We land on the banks on Olkhon half an hour later, pulling up to a bleak landscape of bare earth and bare trees at the village of Khuzhir. The other passengers disappear quickly, and we can’t really see anyone else around. A muddy dirt road leads towards the tiny town, with rows of high slatted timber fences, cottages with peeling paint and the only life to be seen being a couple of local dogs. Its only Autumn and it feels incredibly harsh. Being here in winter must feel like arriving at the end of the earth.

There’s a couple of places to stay on the island, but Nikita’s Homestead kind of has a monopoly on the accommodation options here. Its slightly above our budget, but then again, we’ve been sleeping on a train for the better part of the last week.

Nikitas is a a cluster of beautiful little timber buildings, all built by the locals who form most of the workforce here. Every corner has a new surprise, with incredible rustic wood carvings, well tended verge gardens and eclectic murals everywhere. Its like a little ‘oasis’ in this bleak town. All meals are included with the price which is a pretty useful offering seeing there is nowhere else to eat on the island, and the tour options they provide are about the only way to get around to see the sights.

It might be a bleak landscape, but Orkhon Island is an import place for Shamanism in the area. Wit the smoke in the air shrouding the landscape with a monotonous grey, the only splashes of colour were from the strips of prayer flags visitors tie on trees and Sharman poles, hoping for their return.

We spend the afternoon under the gloomy light, exploring the banks and cliffs of the lake, and being amazed at one brave tourist who decided it was a good idea to go skinny dipping in what we guess he thought was a secluded cove. The water must have been a touch above 12 degrees! But I guess it comes with pretty large bragging rights.

With our limited time before we needed to get back to Irkutsk to jump back on the train, we decided the best way to get around to the sights of the Island would be to join in one of the organised tours from Nikatia. Once again it was back into another UAZ van  to check out what the island has to offer.

The main sights include “Peschanka Bay”, an ex political prison, The Three Brothers Cape, Khoboy Cape, and our favourite…The Cape of Love. According to Sharman legend if you’re hoping to have a boy you should take the path to the left, girl for the right. We hedged our bets and went for both…maybe that’ll be twins ?!

​With the smoke showing no signs of clearing most of our stops were shrouded in a mystical haze, which unfortunately meant we saw little of the lake itself, but at the odd moment it did clear, we were treated to some pretty spectacular views.

The journey back to Irkust goes well…until a dumpling at a road side stop leaves Emma with the worts case of food poisoning ever. Read all about it and the rest of the journey onwards to Beijing in Part 2 of our Trans Siberian Adventures. ​

​And now for the practical stuff.... 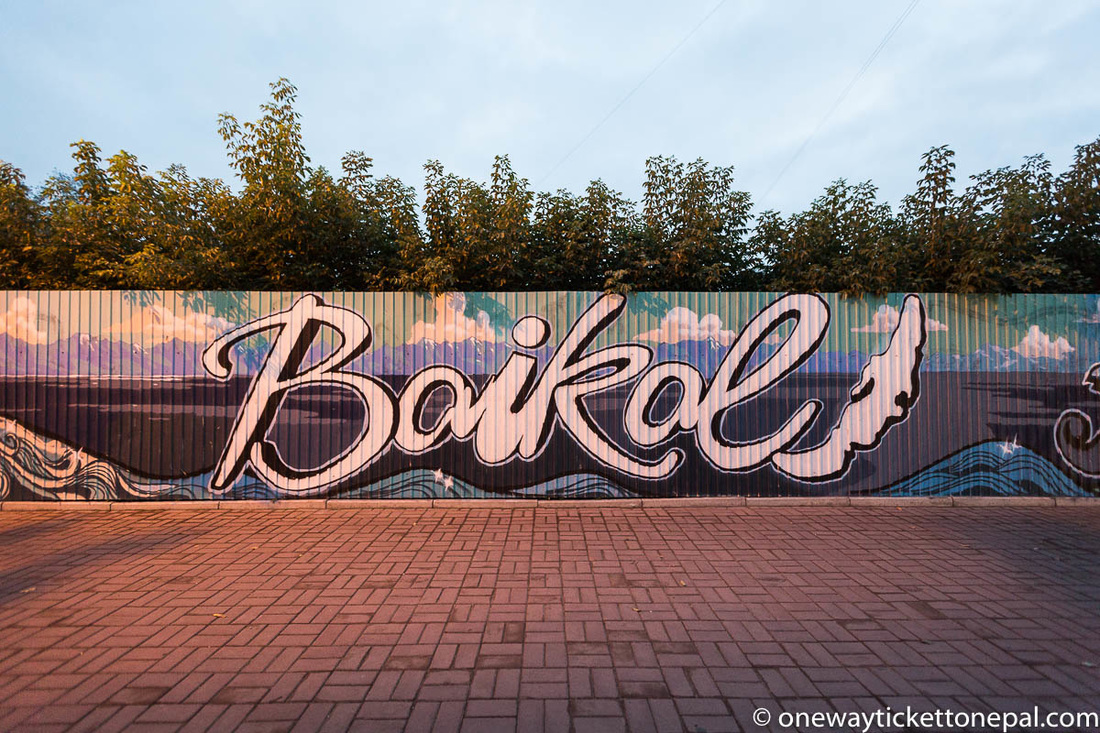 Why should I be excited about Lake Baikal?
Described as the ‘Pearl of Siberia’, Lake Baikal holds a special place in the Russian psyche as the crown jewel of Russia. Not only is it the largest fresh water lake in the world, but with a low point of over 1600m’s, it is also the deepest. Lake Baikal contains around 20% of the world’s unfrozen water, and the region hosts a plethora of flora and fauna, many of it found nowhere else.

It’s been a UNESCO World Heritage Site since 1996 and at 25 million years old, Baikal is one of the worlds oldest - and clearest lakes.

As is the norm in Siberia, Lake Baikal freezes over in winter. The ice is thick enough that new roads are marked and trucks get a huge shortcut.

Culturally, shamanism is the thing here. The remote environment supports a thriving animistic religion. Glowing orbs have been reported on many occasions, and from time to time, large amounts of fish are found dead, promoting a strong superstitious mindset.

Whatever the case, the geology of Lake Baikal is fascinating. The bottom has a 7km layer of sediment covering it, and since it’s a rift valley, Lake Baikal is actually widening by 2cm each year. Mud volcanos are found here, along with unstable gas deposits. Two reported earthquakes were so large they don’t even fit on an earthquake scale!


Where is Lake Baikal exactly?
In the east of Russia, directly north of Mongolia. The earths crust is being pulled apart here, meaning one day, Lake Baikal will be an ocean.

​
How do I get there?
Irkutsk is your starting point. It’s the largest city to the west. From here it’s a 7+ hour, 300km bus ride (and short ferry) to Khuzhir, the largest village on Olkhon Island. If all that sounds like too much, you can take a speedboat or a private car instead. Or if you just want to see the lake, make the shorter trip to Lisvyanka which is a 1.5 hour, 65km bus from Irkutsk. The travellers we met didn’t seem too excited by Lisvyanka, though. We totally recommend Olkhon Island - taking a few days out to explore the wilderness here was a highlight of our trip.

Another option is to visit from Ulan-Ude, the largest town to the east (and another stop on the Trans-Siberian railway). Village hop through lake-side Gremyachinsk and Gorachinsk, and bus all the way to Ust-Bargzin for a real adventure. Or hire a car and drive all the way to Svyatoy Nos peninsular and beyond, to leave the tourists behind and hang with all the Siberian families. 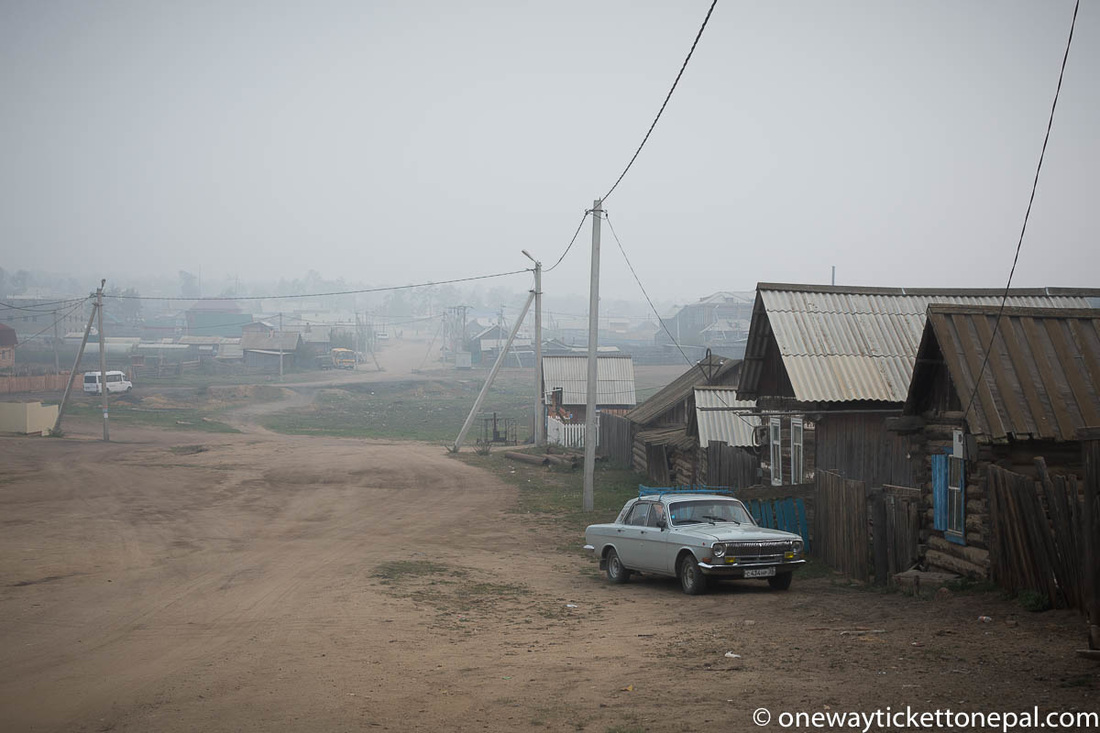 Peak hour traffic in Khuzhir is a real pain in the butt...
What is Olkhon Island?
This sliver of land extends roughly into the middle of the crescent-shaped lake. For a days-long visit, it’s the best balance between culture, nature and adventure. Little Khuzhir is the desolate, quiet little ‘capital’ village.


Where do I stay?
Most people find themselves at Nikita’s homestead in Khuzhir. Nikita’s basically has a monopoly on visitors, and booking ahead is recommended. Rooms are spread across a beautiful collection of uniquely Siberian wooden buildings and come in a variety of sizes and comfort levels. Restaurants are scarce in Khuzhir, so eating is done in the communal huts with meal tokens - Nikita’s has a monopoly on your food, too.

There are three small hotels in the area too, with homestays filling the gaps for those without tents. We later found out about an eco-friendly Yurt Camp, although at EUR30 per person per day, it was above our budget.


What is there to see?
Only a 5-10 minute walk from Khuzhir is Shaman Cave, but inevitably you’ll find yourself on one of the tours leaving from Nikita’s. There are hiking-specific tours, but we opted for sitting in a car and being driven around the island. From beaches, the abandoned Peschanaya Village, Three Brothers Rock and Khoboy Cape it was an awesome day, despite the smoke from the bushfires blocking out a lot of our views. With more time, you can hire kayaks or bicycles and go searching for shaman totems. 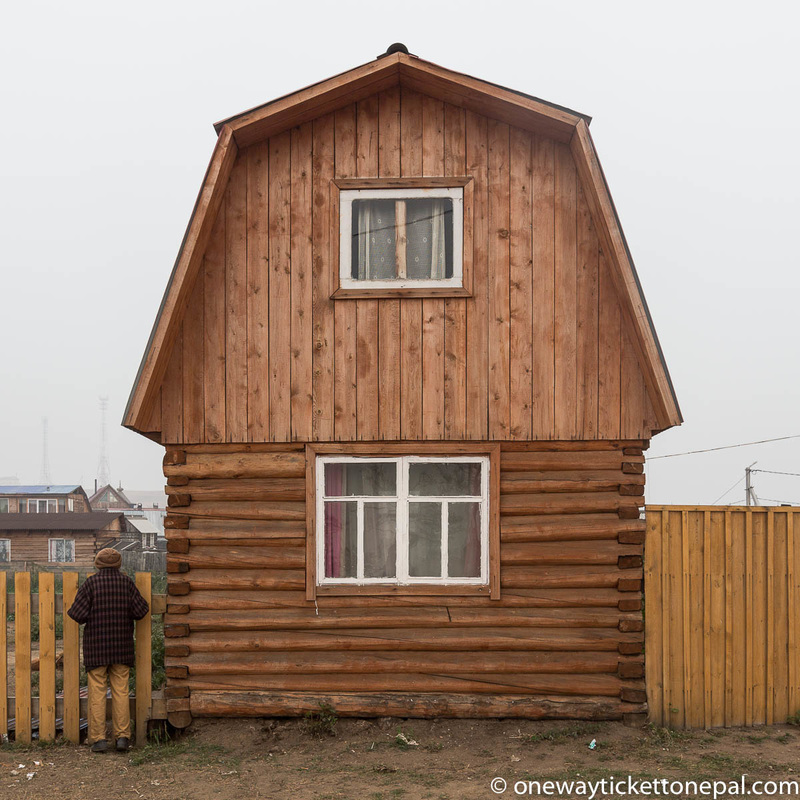