A wet, grey shape made a dash for a pile of fishing crates, followed by a hysterical shriek.
Sure, it was just a rat. But it was hungry.
​And it was the size of a small dog.
The sun disappeared behind the minarette-silhouetted skyline and we found ourselves perched on those tiny structurally-questionable plastic stools that always seem to be found on the dirtiest of concrete. A solitary fishing boat bobbed nearby, illuminated by the timeless combination of fairy-lights and neon-signage.

We were here for one thing - freshly grilled fish-burgers, and like the people around us, it was in our interest to finish these off before an opportunistic rodent made a lunge for our meal. A remarkably healthy-looking cat peered voyeuristically at the scene from behind a dumpster, offering no help in the matter.

We did as the locals did - ate very quickly - and emerged from the grimey, waterside darkness onto the floodlit street, catapulted into the cacophanous Friday-night world of dark-haired figures parading the footpaths of Istanbul with their wide grins, infectious laughter and … newspaper hats?

“Selfie! Selfie! Selfie”, shouted a well-groomed and suited man, clasping a handful of plastic mobile phone accessories as he strode past us, keen to make a 10 Lira sale.

Just yesterday, here where we ate our fish-burgers, kids were jumping off the bridge into the churning waters of the questionably-clean Bosphorus strait.

If there ever was a city of moments, Istanbul is it. 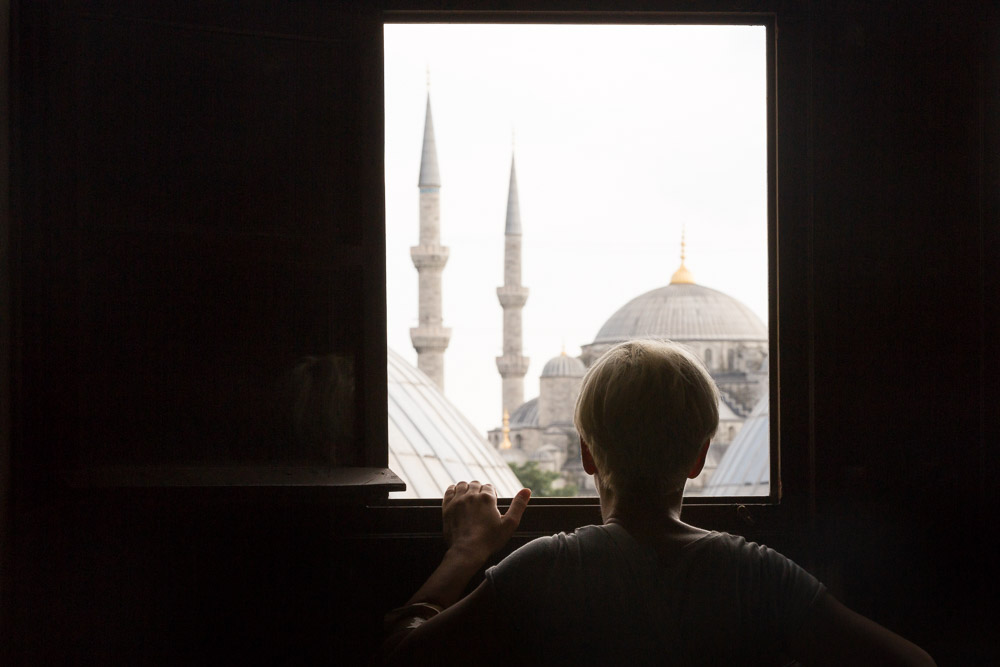 With 3,000 mosques dotted around Istanbul, the average window view is pretty good
At the crossroads of the world, and with a history to match, Istanbul is truly one of the worlds great cities. Going back over 2500 years, the city formerly known as Byzantium (and Constantinople) is a feast for the senses - this heaving, cosmopolitan metropolis balances expertly between Europe and Asia. Not that it has a choice, really. ​

Greater than the sum of its parts, Istanbul is as overwhelming as it is enchanting, with each corner bringing new surprises (and dog poo). There are a lot of corners in this city, the fifth most-crowded in the world.

We spent almost 2 weeks here over two visits, thanks to the enjoyable process of the Russian visa system. Our time was overshadowed by the month of Ramazan (Ramadan to us non-Turks). The holy fasting period made for a lot of grumpy people before the sun went down - and lots of happy ones afterwards.

As we lazily stirred diabetes-inducing amounts of sugar into our tea, watching the sun set behind Maiden’s Tower on the Asian side of Istanbul (a scene we re-lived every other day), we chatted about how possibly could the 14 million people of modern Istanbul balance between the conservative and liberal sides of Islamic culture (despite officially, Turkey being a secular state).

Later that evening, searching for a meal along the Asian side, we found a small alley with a string of eateries, specialising in two things - a single dish, and a eyebrow-raising level of uncleanliness. We plonked down on the tiny stools under swaying fluorescent bulbs, and stared blankly at a woman who jabbered at us in Turkish. Confused, another customer took a break from his tea to spring to our rescue and translate: we were free to eat whatever wanted. It was Ramadan, and we were Welcome.

We chose to pay for obvious reasons, and for the two hours we feasted, we were welcomed in a way unseen in the West. It’s as though this little street, under the watchful eye of the mosque, is a collective extension of the homes of the area, and we were two tall, blonde tourists who stumbled into their living room. In only a day, Istanbul had well and truly won us over.

But it wasn’t exactly all kittens and rainbows… 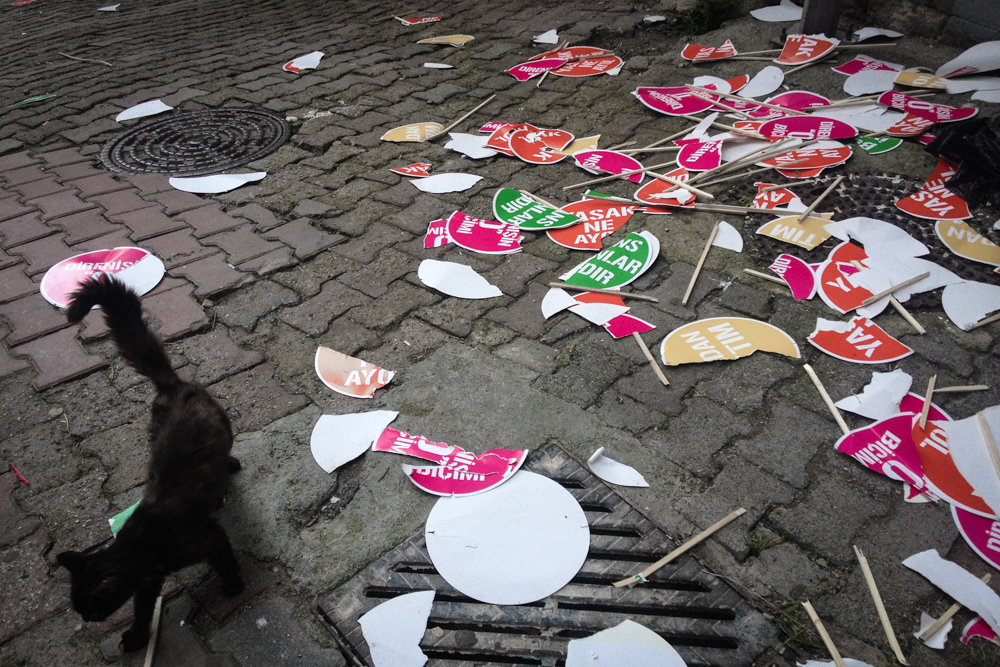 ​It landed right in front of us - a metal-on-concrete ‘chink’, followed by a skittering roll as the canister spewed out gas - but it was already too late. Our eyes burned as our adrenalin soared in the narrow alleyway. We became just two of dozens, running in a crazed fervour from riot-equipped police - young men who, without their helmets and padding, looked like any other guy we passed on the street a day earlier.

We had just surfaced from the Taksim square metro and, spying the weathered riot trucks and countless black-clad figures, opted for the most direct route to our AirBnB apartment in the Beyoglu district. Groceries in hand, our route became less and less direct. Street after street was cordoned off as we snaked our way through the warren of streets until we were caught in the middle of a peaceful demonstration that had swiftly gotten out of control.

The USA had just legalised same-sex marriage and in celebration, people gathered at Taksim Square, the infamous location of pretty regular riots which thrust Turkey to the front pages of every international newspaper on a regular basis. Things clearly got out of hand again, which we later learned to be a surprisingly regular occurrence. Riot police and public demonstrations became an undercurrent to our time in Turkey, as relations with the native Kurdish population and international Islamic State organisation soured to levels of military action.

But these weren’t hard-nosed fighters. This was the LGBT community. We later saw footage on the news sites of people being thrown around like rag dolls by water cannons. We were clearly in over our heads.

It took us nearly 3 hours to make the 20 minute journey home. Casual groups of 20-30 riot police lounged on the street blocks near us, smoking, laughing, like it was any other day as we made it further from the epicentre of all the troubles, passing only shredded placards in the unnaturally quiet streets.

A city of moments. 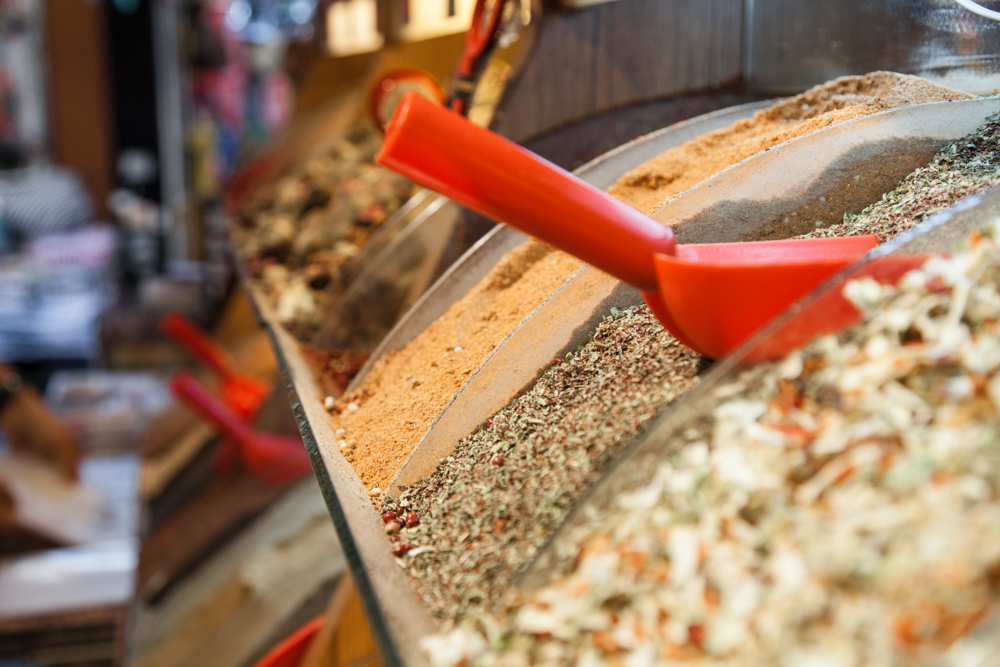 ​Geometric-patterned crimson rugs soak up the unintelligible echo of the Ezan, the call to prayer that reverberates both around the ancient stone alleyways and the inside of our skulls.. The pungent aroma of freshly-ground coffee dances and swirls with rose-scented baklava and piles of cumin as all our senses are assailed in this, the most ancient and venerable of market places.

The twisting labyrinthine alleyways have long-since decimated our sense of navigation. This is the Grand Bazaar, a place evolved to separate customers from as many lira as humanly possible - and have said customer enjoy the experience regardless.

Time has certainly moved on here. No longer is the Grand Bazaar a ramshackle collection of traders, peddling exotic trinkets and bewildered animals - it’s now a tightly-regulated enclosure, complete with security guys who don’t know how to smile.

The goods still do travel from faraway lands, though; China, to be precise.

Drifting through the crumbling passages, stopping only for a cut-throat shave is a quintessential Istanbul experience if you believe the guidebooks. Personally, having a wrinkly old guy who can’t speak English wave a razor-sharp piece of metal next to our throats isn’t our idea of a holiday.

Don’t get us wrong - the whole Grand Bazaar experience is amazing, even if some of the romance is lost in the knowledge that this is tourist central. Our coffee pot could have been purchased around the corner for a quarter of the price, but we’d like to think our baby was free-range - raised (with love) from an incense-filled, dazzling emporium, rather than caged among hundreds in a fluorescent-lit white-tiled room.

Eager to get our sea legs, we braved the chaos of the Eminonu ferry terminal and took to the water to see how things fared further up toward the Black Sea. With Kelvin, our surprise visitor from London, we found a quiet spot on the side of a north-bound ferry and lazily bounced back and forth between the European and Asian continents like a game of pong. And no, the novelty didn’t wear off thank-you very much; “We’re in Asia!”, “We’re in Europe!” we’d say every 10 minutes, much to the annoyance of our fellow passengers.

We stopped for the famous Kanlica yoghurt, (of which tasting is worthy of a visit to Istanbul alone), and were surprised just how much the metropolis spread; dense housing swallowing up the waterside palaces all the way up the coast with watchtower-like apartment blocks inland. With all the gigantic bridges soaring overhead, and more under construction, this could be prime scenery for a monster movie.

Stretching our legs at our final stop, the village of Anadolu Kavagi, we slalomed around the welcoming arms of restauranteurs to scale the crumbling remains of arid Yoros Castle. Looking north-east across the hyperreal blue of the Black Sea, we imagined where Crimea was, and realised just where we were in the world; heavily fortified borders with all its neighbours: Bulgaria, Greece, Syria, Iraq, Iran, Armenia and Georgia, it’s no wonder we’re constantly surrounded by Turkish flags and Mr Moustache himself, Ataturk. National identity is prime time here.

There was only one area of Istanbul that we experienced that seemed quieter and more laid back. 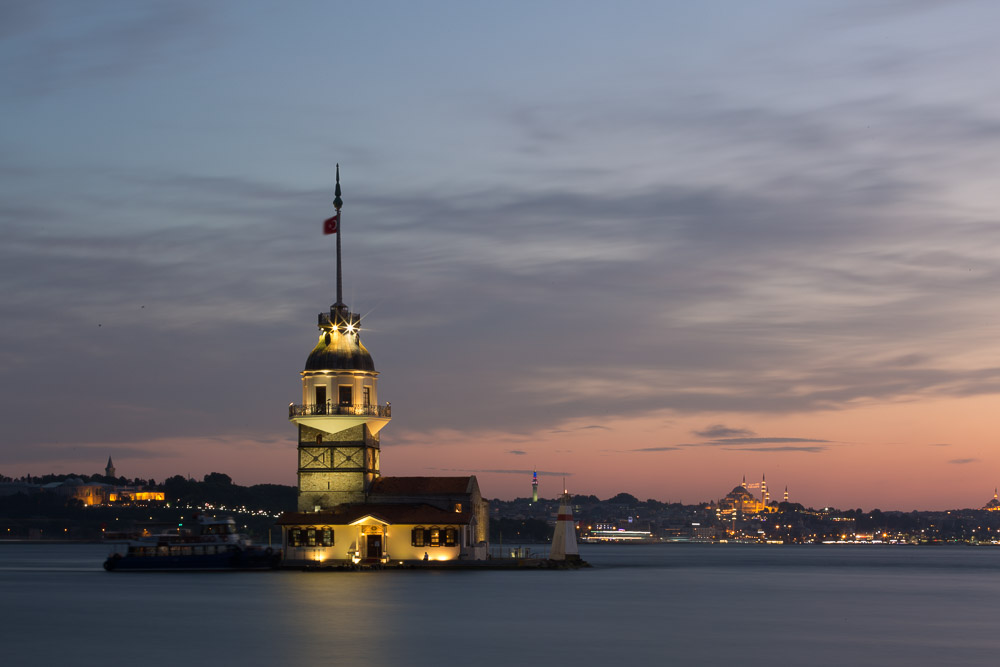 Maiden's Tower - great spot for sunset
​After 2 merciless hours shaking our fist at the fragmented metro system, we found ourselves in Caddebostan - a balmy, beach-side district, south along the Asian side. It’s the kind of place where the 30-something locals work in the creative industry and own a dog, drinking beer on the green grass, working on their tans in a carefree way. Sunsets are as nice as the bars, the restaurants and the people. Life is good.

We were here for our Portraits: London to Sydney photo series; hanging out with a few people and generally admiring the thick beards and facial hair that Turks excel in. It took us a bit by surprise; life here was very much like a weekend in a London park. Except with blue sky.

Back in central Istanbul though, there is a lot vying for attention. Between Hagia Sofia, Galata Tower, and the Blue and Suleyman Mosques, it’s easy to get swallowed up in clamour of Istanbul. Sightseeing is an Olympic Sport here, with crowds to match. We didn’t make it to half the things that turn up in a TripAdvisor best-of, not least because of the extortionate admission prices.

And so our fondest memories are the in-between things. Early morning jogs around Topkapi Palace with a street dog. Sipping on Mehmet Efendi Turkish coffee while the call to prayer wails around us. Enjoying back-alley rice pudding in a restaurant we’ll never find again. Anguish, as the traditional ice-cream man steals our ice-cream right out from our hands at the last moment.

In fact, Turkish food is something that took us by surprise. For all the celebrated markets and the plethora of spices, the majority of Turkish food is really just variants on the same basic essentials: rice, pieces (or minced) beef or chicken, flat bread, tomato (grilled or fresh) and a hot pepper of some sort. Whether it’s wrapped up or on a plate, eaten in a street-stall or a fancy restaurant, traditional Turkish food is about as functional as it gets.

We can thank the Ottoman’s for that one.

But hey, at least it’s fresh, plentiful, super tasty and served with a smile.

Unless it’s by those damn ice-cream men. Just give it to us, already.